Oasis Stores Get The Latest in Cabling Fashions 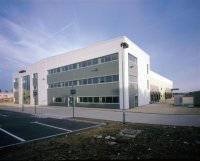 The fashion retail market is one of the fastest changing and highest throughput sectors on the high street. In order to stay one step ahead of the competition leading retailer Oasis Stores Ltd, part of the Mosaic Fashion Group, needed to increase its office and warehouse facilities due to an increased number of lines and the recent acquisitions of Coast, Karen Miller and Whistles. A purpose designed and built facility was constructed close to the existing warehouse, just outside Oxford, with a 3 level mezzanine, 100,000 sq m warehouse and 4,000 sq m of offices over three floors.

Electron were appointed by the building services contractor and designer C A Sothers to design and install a cabling solution capable of supporting the business’s voice and data communications requirements. An important consideration was the fact that the warehouse would contain garment storage and sorting equipment that could be susceptible to electromagnetic interference (EMC). A two part solution was adopted, with a Cat 5e UTP solution for the office areas, cabled from a main Comms Room, and a fibre based solution for the warehouse terminals and equipment, cabled from a separate Comms cabinet situated in the warehouse.

A Connectix Net 5e cabling solution was installed in the offices as this offered the best balance between performance and price, as well as a Lifetime performance warranty against the finished installation. Patch panels were mounted in two Chatsworth open racks in the main Comms Room, linked by Low Smoke, Zero Halogen (LSZH) sheathed cable to nearly 600 outlets in the office areas. The main, open plan offices on the first and second floors had been fitted with raised floors, making a floor box distribution system the obvious choice. Each floor box was fitted with four 6C outlets, with spare cable left under the floor to allow the floor boxes to be moved up to two metres in any direction. In the ground floor offices and communal areas standard faceplates were mounted in dado trunking.

In the warehouse 4 core OM3 fibre optic cables were fixed at high level before dropping down to outlets mounted at pre-designated positions. These outlets provide connections for PCs controlling the picking, sorting and packing machinery. In addition there was a requirement for a wireless network in the warehouse that would enable the handheld barcode scanners used by warehouse staff to connect with the servers. Following a survey it was found that a total of 27 wireless access points (WAPs) would be required to cover the whole warehouse, the high number dictated by the three levels of metal mezzanine flooring. All of the wireless access points were wired back to the warehouse Comms cabinet using Cat 5e STP cabling, with power to the WAPs provided by a Power Over Ethernet (POE) switch.

Nik Chambers, Operations Director C A Sothers, commented ‘Throughout the duration of the contract Electron’s proactive project management and progress reporting was first class. The fact that the site went from brown field to completion in just seven months meant that the cabling had to be installed in a compressed timescale. Electron’s ability to address issues arising, such as rework caused by other parties or changes to our schedule, meant fewer problems on our plate. Looking at the completed installation, I cannot fault the quality of the work and would certainly recommend Electron to any company undertaking a similar project.’

The finished building now houses the Mosaic Group’s core functions, such as IT and finance, with the warehouse processing up to 450,000 items per day and shipping to more than 600 stores located worldwide.

Click here to view the PDF file associated with this story.